Outside the Box With Leading UK Darksynth Artist, DEADLIFE

In the first of a new off-genre feature, we sat down and spoke to leading Darksynth artist, DEADLIFE.

Hailing from Manchester, UK, DEADLIFE is a pioneer of one of the world’s fastest-growing and increasingly-appreciated genres. His music has always appeared on NewRetroWave, the leading label and YouTube channel for the Synthwave scene.

Since day one, NewRetroWave has championed the retro synth-driven sound and every significant artist in the scene has released on the label at some point. It continues to expand and drive the fast-growing genre’s evolution through a skilful A&R process and now entertains over 1 million loyal followers on YouTube.

Ahead of his eighth full-length studio album in November, we caught up with DEADLIFE to talk about the forthcoming ‘Dark Nation’ and got to know more about the artist behind it – as well as the interesting genre he envelops.

Hi DEADLIFE. Thanks for taking the time to join us, and also for being the first person to feature in our new ‘Outside The Box’ series.

For those of our readers and followers that have never heard of Darksynth, how would you describe the music if they weren’t ever able to hear it?

Dark sounding synth sounds that are distorted.. like electronic sounding metal, but with sounds from 80s synthesizers.

Tell us a little bit about your background? (Both musical and personal).

I’m from Crewe originally, a small, rundown town in the North West of England. Musically when I was growing up I was always into soundtracks from games, I’d just leave FF7s music on loop and chill in my room. I was pretty much obsessed with FF7’s music and I’d talk about it at school and annoy my friends about it. I just loved it. I’d also listen to old Playstation Magazine demo disks because they’d often have a track from the soundtracks of the games on there. Most of my childhood I was just in my room chilling listening to music, or playing games.

My parents wanted me to learn an instrument so at 6 I started learning Cornet, which is like a small trumpet I guess. They took me to rehearsals for a brass band several times a week and I ended up starting to play the drums. At the time I didn’t really like going, all my friends were out playing and I was going to a 2-hour practice on a Friday night, but now I’m pretty thankful. I was basically brought up in that band and we’d do a lot of contests and concerts around the area. By 10 I was sometimes playing solos in front of hundreds, which did a lot for my musicality I think.

In my mid-teens, I ended up leaving as I wanted to form a rock band and I felt like I’d outgrown it, plus I didn’t really enjoy it at that point. In 2005 I formed a rock band that did a few tours. I couldn’t play the guitar but I’d somehow manage to write a bit with the guitarist. In 2012 it all went south though. I wasn’t feeling the music or the whole social side of being in the band, and I found myself being forced to leave. Though this turned out to be a blessing in disguise, at the time it truly knocked me flat.

What is it that is so special for you about Darksynth? Are there any specific factors that speak to you?

It’s quite a broad term, even for a sub-genre of a sub-genre, but for me, I like that I can go hard because that makes up a lot of Darksynth. I like to contrast light and dark, soft and heavy, and it allows me that creative freedom. I’m not sure if I’ll always be considered Darksynth, it’s quite a new genre really, but I love the distorted synth basslines and drones that come with it. I love the dark, gritty, dystopian sounding soundscapes I can create.

Can you tell us anything about the Darksynth scene outside of the music? Does it have a ‘look’, key events or any particular imagery associated with it?

For me personally, it’s all about dystopia and cyberpunk. That is where I feel at home with my current sound and the feel I am going for. But in terms of Darksynth generally….. probably pentagrams and horror imagery.

You have an album on the way on 20th November on NewRetroWave Records. Tell us a little bit about it and how it came to be?

It’s mostly inspired by how things have transpired in the real world, a deep feeling of dread and uncertainty. Interestingly I’ve always loved cyberpunk and now I feel current events are leading to that exact future. Even as a kid I felt like I knew that’s the way the world would go, which is probably why I’d read 2000AD comics with this weird sense of terror and fascination. It’s like we all knew it was coming eventually.

What are your biggest inspirations and influences? Is there anything that drives your sound in particular?

It’s hard to pinpoint exact things because there are many. I guess the image of rain-drenched concrete in a built-up slum, smoke, drug addicts and the poverty line helps. I tend to get images in my head and then put music to that image. It’s more of a feeling that I get with it though, and these days it’s been a lot easier to get inspired because all I have to do is look around me. Life is rough, bad things happen to good people, I’ve seen people lose themselves to substances, people who fell on hard times. I have to keep grafting because I know we’re only ever a paycheque away from being homeless. To being on the end of a needle.

I had a decent upbringing in an alright area, I was lucky, but by my late teens, I was working minimum wage jobs and living in the back of a van and on friend’s sofas. The broken smiles of friends old and new. I try to pay homage to those people in my music, but the actual process of influence is not something I ever feel I can eloquently say. I have a lot of respect for my friends who have been through a lot but are tough as nails. Real people with real stories. People who have learnt to adapt to a changing world.

In your opinion, what is the most underrated piece of musical equipment that you use – be it analogue or digital?

Ableton’s built-in compressor. It’s amazing, I use it a lot. I have other compressors that probably sound better but for a quick adjustment it’s really good and takes up barely any CPU, which is pivotal, especially in the past.

If you could only make one other genre of music for the rest of your life, what would it be and why?

Game soundtracks, or whatever they call it now… Scorecore?

Do you think Darksynth can become as popular as the likes of House or Techno in the future?

I’m not sure. The genre will evolve, and I hope to evolve with it. House and Techno have totally different subcultures from my experience, mostly raves, dance tracks, and everything that comes with it. I’m not sure if it’d go down that route, but if it did I’d be stoked.

Does your mental health have any impact on your musical output? If so, how and why?

I think it goes without saying that it has an impact. If I feel a certain way I’ll write, and out comes a song, usually reflecting how I feel. The chords I use will be directly influenced by that feeling. It’s cathartic.

Lastly, is there anything you would like to ask us? We like to think of interviews as a two-way street and it feels like nobody allows artists to ask questions. The floor is yours!

Her vocals are angelic here as they float way up top above a jagged synth bass and darkly emotive atmosphere. The breakdown allows the purity of Hedrick’s voice to shine through, off-set by the pixelated melodies and crashing, maximal beats.

The whole track is expertly produced and captures a sense of emotional turmoil that everyone can relate to.

The next single ‘Drift’ is to follow on October 23rd before the full album in November 20th, and already this single suggests DEADLIFE is in the form of his life. 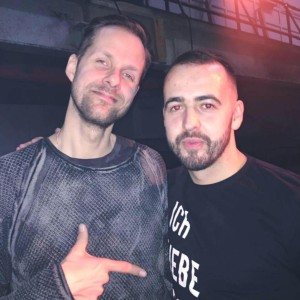